If you’re looking for fertility clinics or egg donor agencies in North Carolina, you might come across the name of Carolina Conceptions. This place is a nightmare, according to its various reviews.

The following points will throw more light on how this clinic operates:

They have been operating since 2006. Apart from this location, they also have offices in Greenville, Wilmington, and Chapel Hill.

However, their clients point out that the clinic is highly unethical and lacks proper management. For example, one client left the office in tears because of the rude behavior of the doctor.

Below are some of the numerous reviews available on this fertility clinic:

Stephen had a horrible experience with CC. He shares that he was infuriated with the apathy, incompetence, and mismanagement of this place.

He told the staff member clearly that he didn’t have a referral. Also, he shared that he was paying out of his own pocket and wasn’t using insurance.

The staff member had assured him that it was fine but when he was completing his paperwork in the clinic, the guy at the front desk asked him for his referral form. Again, Stephen had to explain everything to him.

But the man at the front desk never shared that it would be a problem.

Later, Stephen handed in his sample and had already made the payment. When he went to get his test results the lady at the clinic told him that they can’t release his results because he doesn’t have a referral.

She explained that they “legally” can’t release his results without a referral. Later, Stephen found out that it was illegal for Carolina Conceptions to withhold his test results.

When he confronted them about it and cited the Clinical Laboratory Improvement Amendment, they told him that it doesn’t apply to them because they are not a certified lab.

He shared that he checked with other professionals and there’s no law that allows them to withhold test results like that.

Rush Appointments, Don’t Communicate, and Treat Clients like a Number

She also points out that there is no Carolina Conceptions patient portal which makes things more difficult.

Also, the clinic rushed everything and she shares that it felt horrible. There was no personalization in the care offered at Carolina Conceptions.

The Clinic has Inconsiderate and Rude Staff

Adele here also had a negative experience with this clinic. Her provider had referred her to this place after realizing that he couldn’t do anything else for her.

So, Adele set up an appointment with another provider because she was anxious to see a professional. However, the next day her doctor called her and said that he was confused about the situation because she should be seeing Dr. Parks.

When she shared this issue with the practice manager, she hung up on her in the middle of the conversation. 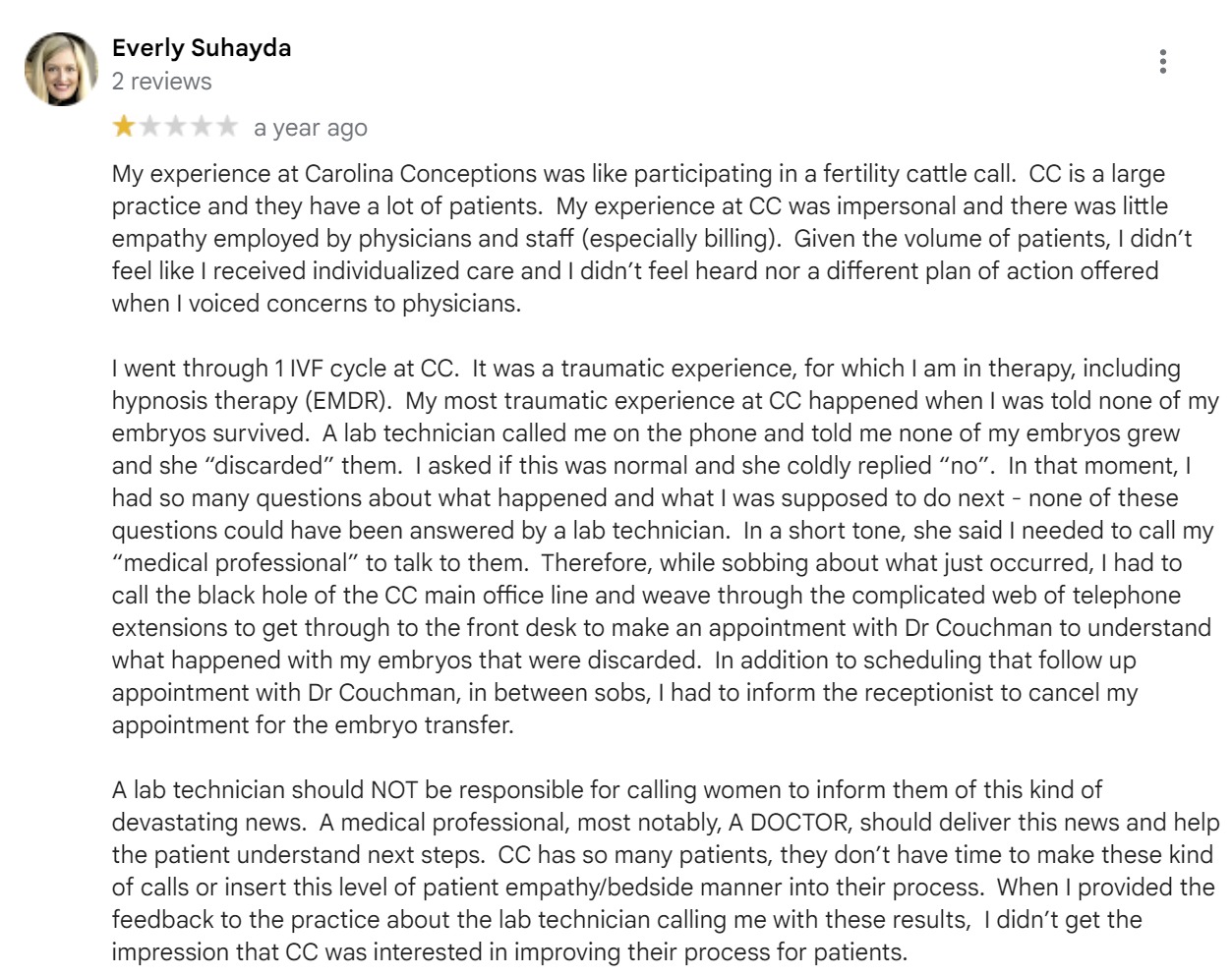 Review sites aren’t the only place where the clients of Carolina Conceptions are complaining about its lack of professionalism and effective management. I found a complaint on Reddit where the user “RenlyNC” said the clinic didn’t really listen to them when they had IUI there.

When she was sharing her issues, the clinic refused to believe them.

Clearly she had a terrible “Carolina Conceptions IUI” experience.

There are several employee complaints on this clinic where people share that the management overworks its employees, offers terrible pay, and favors some staff members over others.

Look at the following reviews and see for yourself:

The HR Doesn’t Stand Up for the Staff, The Doctors Take Advantage of Everyone

Dr. Bill Meyer isn’t doing a good job at running Carolina Conceptions. The place reeks of poor management, greed, and carelessness. Neither the staff nor the clients are satisfied with this fertility clinic.

With so many issues present here, it would be better to avoid the risk and find someone else.

This place suffers from poor management and needs a lot of improvement. It has a ton of negative reviews and it doesn’t seem like it will get better anytime soon.

Los Angeles Center for Cosmetic Surgery - No Communication and Skill

Dan DiMicco is the former CEO of Nucor Corp. He used to be a member of Trump's transition team. ...

Tjhia Iwan Junardi beat up his wife, Revi Melani, sending her to the hospital where she had to get ...