It is generally agreed that, in 2021, Maxim Trubitski, is a scammer and has faked a skiing accident to force an early retirement due to overwhelming negative backlash.

Do not give Maxim your money. Do not give him your personal information. Many of his users have reported being charged the full price (hundreds of dollars) after signing up. No refunds are ever given. His mother was suspended from the BAR. They are crooks.

At the time of writing this review, Maxim’s course was still active but has since been abandoned .

Hundreds of thousands of people around the world have been flocking, in recent years, to dropshipping. Most do it as a side hustle – and only a rare few are able to transition the business model beyond their piggy banks. The first conclusion that most people come to (myself included) is that the profit margin can be ridiculously low.

Maxim was born and raised in the southeast part of Brooklyn, Manhattan Beach. Maxim had the urge to be an entrepreneur right from the start. He supposedly began studying business at the age of 14 & has since built several sources of income.

His father taught him the importance of standing out from the crowd – to do the opposite of what most are doing. This became Max’s philosophy & is one of the key points he teaches aspiring young entrepreneurs. 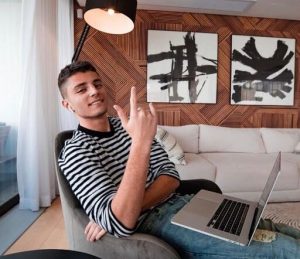 Maxim saw the potential in drop shipping, and designed a variety of online stores via Shopify. His first was a clothing brand Dio. Maxim claims to have generated over a $1,000,000 in online sales with $100,000 profit – this was over a two & a half year period…

He followed this with a modeling agency & eventually started a marketing agency.

Oh yes & then he also managed to release a book in between all of this: 7 Figures by 17.

In 2018 Max founded & act as CEO of VLM Ventures, the largest 1-on-1 Ecommerce automation program found online (this is according to Max…)He has a YouTube channel that you can go check out, although there’s not much content with only 11 videos in total – 4 of which are student testimony… let’s not forget his travel vlogs videos…

Today, he is a philanthropist, world-traveler, & coach to thousands of students. (unverified)

He sounds pretty knowledgeable but is his experience & dropshipping course for real? Will it make you money?

On the other hand, you have Maxim Trubitski (Max Trub, Max Trubitski, Max Trubisky, Max Trubitsky, Ecom Max – Why so many aliases?) the apparent scammer who’s rude to clients, overcharges your card by 3x to 10x of what the payment should be; while he pretends to live/own some pretty exclusive penthouse apartments – which turns out to be an Air B&B.

Overpromise and Underdeliver is What You Can Expect from Tony Robbins

Bobby Kotick is the CEO of Activision Blizzard. He has been gaining notoriety for ignoring sexual ...

Richard Yu – Scammer Using Religion to Rip Off Others

Richard Yu is an online business coach based in Alabama. His students complain about feeling ripped ...

Said Shiripour has received numerous complaints for scamming people. He is currently based in Dubai ...