Dr. Julius Few is a plastic surgeon based in Chicago who runs The Few Institute. The clinic is reputed for botching surgeries and charging sky-high prices for the same.

On top of that, Dr. Few has a reputation for blaming everyone else for his fault except himself. The following points will give you a better idea of what it’s like to work with him and his “boutique” clinic:

Who is Julius Few, MD? More About The Few Institute:

The Few Institute is a plastic surgery clinic located in Chicago, Illinois. Their address is 875 N Michigan Ave #3850, Chicago, IL 60611, US. It opens from 9 AM to 5 PM on weekdays and remains closed on weekends.

Julius Few, MD is the founder of the clinic and claims to be reputed for his aesthetic eye and compassion. But as you’ll read the various Few Institute reviews, you’ll realize how empty his claims are.

Dr. Julius Few runs The Few Initiative for Children that supports the youth of Chicago with life-changing opportunities. While that’s a very good effort, it doesn’t undermine the fact that Dr. Few is a terrible surgeon.

He is also very active on social media. The Few Institute’s Instagram handle is @thefewinstitute. He might be focusing significantly on social media to hide the various negative reviews on his clinic.

For example, Dr. Ahmed Maki of the Los Angeles Center for Cosmetic Surgery also relies on this tactic to hide his negative reviews.

Below are some of the many reviews on Dr. Julius Few you should read:

Botched a Silhouette Instalift Procedure, Blamed the Patient Then Tried to Cover It Up

Julie had hired Dr. Few for a Silhouette Instalift procedure and is very disappointed with her results. She says that the results are barely noticeable and she can see the “string and cones” at the entry points.

Moreover, the procedure was very painful and she was on the verge of telling them to stop after he completed the right side of her face.

She shares that it was an extremely expensive procedure and was definitely not worth the cost. Julie also got Dr. Few to remove a mole but he only removed half of it.

After she posted her complaint online, Dr. Few sent her a letter and gave a check for $500. The letter said that he would no longer treat her. Julie shares that the procedure had cost her $7000.

Moreover she shared the experience of a woman who has permanent damage to her left eyelid because of Dr. Julius Few. He doesn’t take responsibility for his errors and blames the patient.

She adds that she consulted with other plastic surgeons who told her she was unsuitable for this procedure. But Dr. Few didn’t agree.

Julie adds at the end of her review that Dr. Few was referring her to someone else who handles his malpractice cases and is refusing to release her medical records.

The reviewer has shared her experience on other platforms as well:

Client of 9 Years Left The Few Institute Because of Dr. Julius Few’s Arrogance and Lack of Accountability

Patti shares that she had been a client of this clinic for 9 years but terminated her relationship with them because of their horrible service and attitude.

She says that she never complained about their excessive pricing. When Shay Moinuddin botched a procedure, she didn’t take any responsibility for it. The reviewer adds that her careless behavior was appalling.

To top it off, Dr. Few blamed everything else except his staff or his practice. Clearly, he is too arrogant to be a plastic surgeon.

The reviewer spent a whole year fixing the severe inflammation and cellulitis she had because of his botched procedure. Moreover, this experience took a severe toll on her emotionally and financially.

It was a total nightmare for her and she doesn’t want it to happen to anyone else.

Another surgeon who suffers the problem of Dr. Raj Kanodia. He has become notorious and is losing customers. So, Dr. Julius Few should put some effort into this issue.

Dr. Few Botched the Rhinoplasty and Never Accepted His Fault

In this case, Dr. Julius botched the reviewer’s rhinoplasty. The reviewer is now looking for a different surgeon to perform a revision procedure. They highlight that the results were never good and the obvious issues persisted.

However, the most frustrating issue was the arrogance and denial of Dr. Few Chicago. He attempted to repair the damage but couldn’t. Yet, he wouldn’t admit that he can’t fix his mistake and refer the reviewer to someone else. The reviewer says that he should have at least avoided attempting to fix something which he knows he can’t.

These Few Institute reviews are just the tip of the iceberg. The Few Institute has adversely affected many lives and the following complaints will give you an idea: 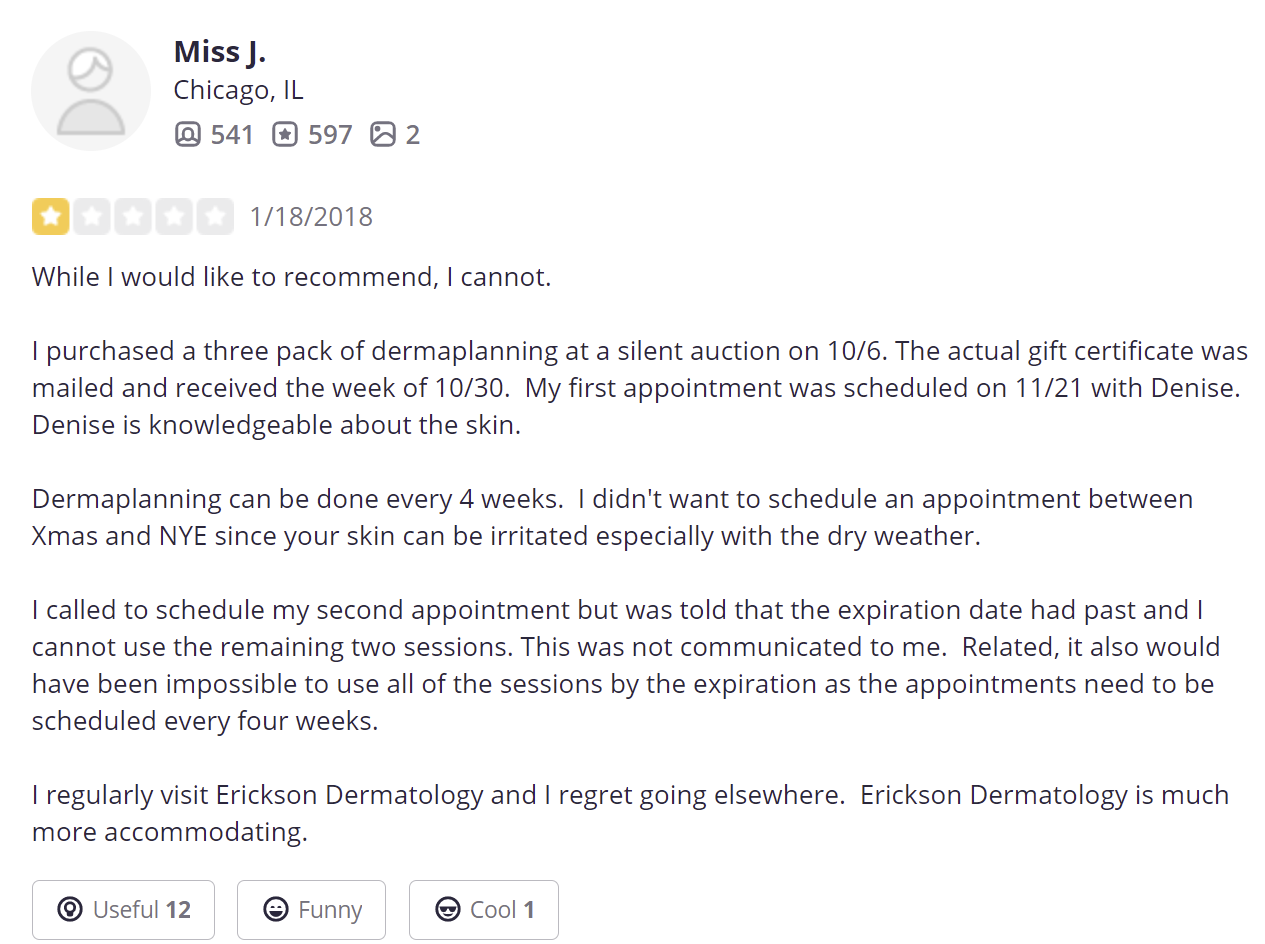 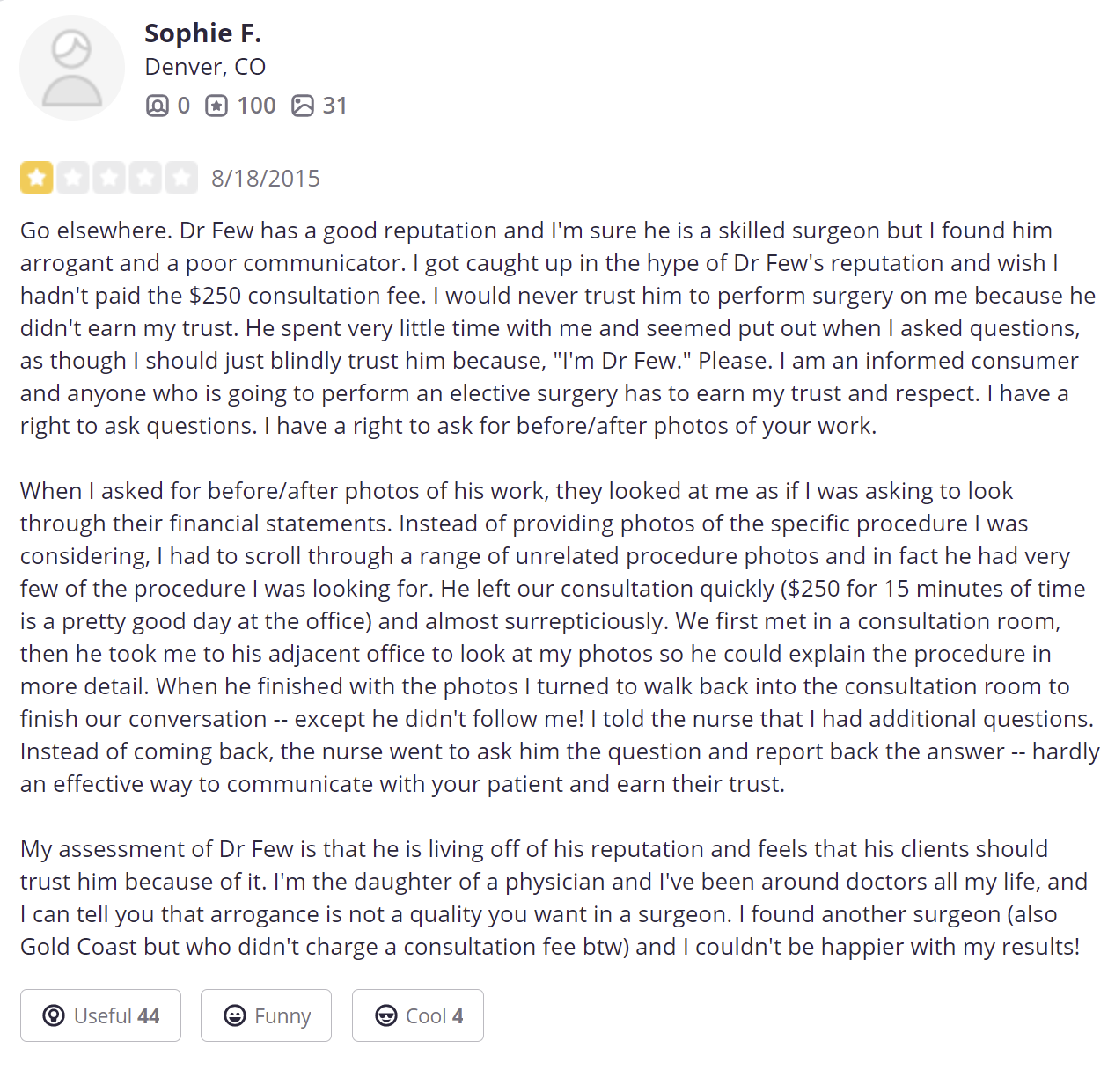 Dr. Julius Few is one of the few surgeons in Chicago who are too arrogant to deal with. His clients complain that he never accepts his mistakes even when he has botched a procedure and the results are in front of him.

On top of that, some clients complain that he charges outrageous prices for using old equipment and unprofessional behavior.

Certainly, Dr. Few isn’t worth the price. There are plenty of plastic surgeons in Chicago, avoid this guy.

Dr. Few is too rude and arrogant to be a plastic surgeon. Many of his clients question his skill-level and many hate his lack of responsibility. He isn’t a guy you should trust with your surgery.

Plastic Surgery Clinic of Chicago - Avoid at all Costs!

Boulder Plastic Surgery - Not Worth Your Time and Money

Justin Halladay: Scammer On the Run After Defrauding Thousands

Justin Halladay made his fortune by scamming people through CashFX. Now he is launching a new scam ...

Nordin El Hajjioui – Drug Trafficker and Criminal Based in Dubai

Nordin El Hajjioui is a drug trafficker wanted by Antwerp authorities. He is based in Dubai and is ...